Bohdana Innes, Krystel Clark, and Chelsea Jacobs tell us their impressions and interactions with the exhibit and its visitors during their time as Cultural Hosts of UNCEDED. 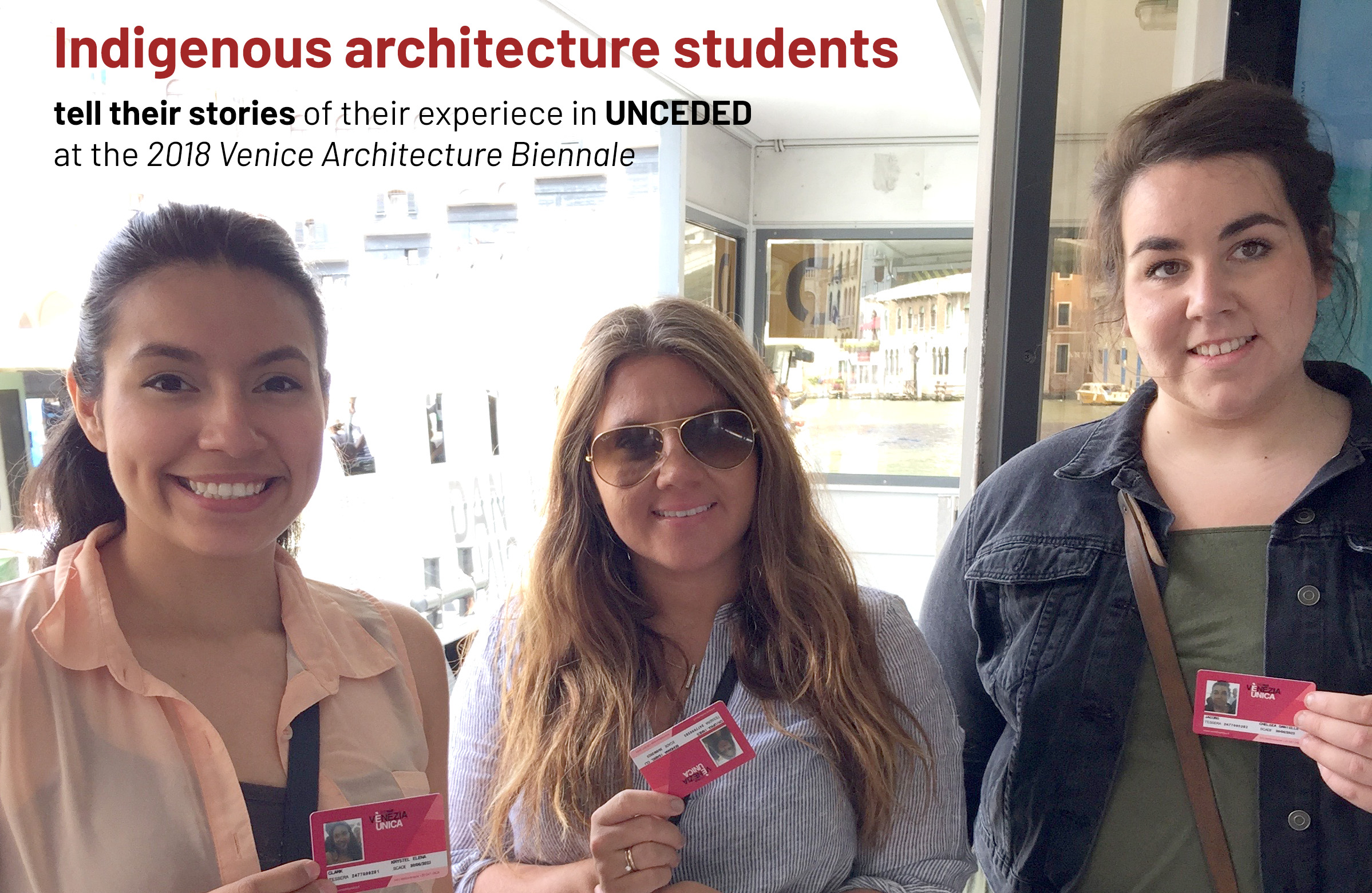 Let us begin by introducing ourselves, as we are the first group of Canadian students acting as cultural representatives for the UNCEDED: Voices of the Land Exhibition of 2018 at the Venice Architecture Biennale! First, we have Bohdana Innes, she comes from Cree heritage of O’ Mushkegowuk territory specifically Moose Cree First Nation. She is currently going into her final year of the Bachelor of Architecture program at the Laurentian University McEwen School of Architecture. Next, we have Krystel Clark, she is of Cree descent from Saskatchewan, Montreal Lake Cree Nation. She will be completing her Master of Architecture next spring, also at Laurentian University. Then there is Chelsea Jacobs, she is of Ojibwe heritage from Curve Lake First Nation. She is entering her final year of the Master of Architecture program at Carleton University. We are all so honoured to have been chosen as representatives of Indigenous culture for the UNCEDED exhibit! This is an incredible opportunity that will greatly impact our future careers as Indigenous architects.

We would like to share our thoughts and experiences of the exhibit based on our first six weeks of being here in Venice. We will start with our first impressions of the exhibition, followed by the amazing feedback and interactions with visitors from all over the world.

Our first impressions of the exhibit were fuelled by the excitement of finally being in the Venice Biennale Exhibition! Upon entering the Canadian Exhibit, we were greeted by the voice of spiritual elder and grandmother, Jane Chartrand of Algonquin Park. She represents the importance of the matriarchal society in the Indigenous culture. In the video, she was welcoming us to enter the UNCEDED: Voices of the Land exhibit. As we continued into the exhibit, we could hear the voices of the architects and the voices of the land, coming together to embody the Indigenous culture. Faintly in the distance, we could hear the traditional pow-wow music as it blended in with the chorus of voices. We knew we were here and our ancestors were here to welcome us. We were excited to finally be standing in the Canadian exhibit as representatives of our culture, but also to see the vision of all 18 architects come together to represent Indigenous Architecture!

Taking in the full experience of the exhibition, we’ve expressed our first impressions as we moved through the exhibit which is organized around four themes of territories; Sovereignty, Colonization, Resilience, and Indigeneity. Each territory had a different impact on us, resulting in a poignant journey from beginning to end.

As we entered the first territory of Sovereignty, we were able to see the Indigenous architects speak, those of whom we are proud to look up to as our mentors! Their stories and how they perceive Indigenous architecture is so empowering and really inspires us as designers. Their explanations of how our traditions and culture apply to the field of architecture and the importance of community involvement, embolden us to further explore how to design for the future of our culture.

As we continued through the exhibit, we moved into the Colonization territory, where we were able to listen to the painful stories of our people. We heard how the first-hand accounts of how colonization has affected them personally, and how it has continued to impact the generations after. Trying to hold back tears as we watched the videos of those recounting their personal stories, we were overcome with emotion. We felt anger learning about how colonization all began in 1493 with the Pope issuing the Papal Bull that declared:

"savages have no souls, you may kill them"

We experienced sorrow, witnessing the devastating impacts of the Papal Bull and all the bills that followed which were meant to decimate the Indigenous people. The arrival of settlers lead to the loss of 9 million Indigenous people from the time period of 1492-1900 as a result of foreign diseases and violent colonial conflicts. It is heartbreaking to see how our culture has been affected and has had to fight to endure. Seeing all the bills and policies that have been in place for over 500 years is a reminder of how much we have overcome and continue to do so till this day.

After, we moved into the territory of Resilience, where we were able to view and hear the voices of the architects. We heard them talk of their experiences as Indigenous architects and the challenges of overcoming the impacts of colonization. They described how they have learned to incorporate their culture into their design and how the designs better represent Indigenous communities and their connection to the land. We are reminded of the importance of our voice as Indigenous people reclaiming our connection with our culture and how that is represented in our architecture.

As we moved through the subsequent territories towards the final territory of ‘Indigeneity’, the beat of the drums and the song of the pow-wow music grew in strength. We found ourselves immersed in the music and the visual representation of the community and traditional celebrations. We felt empowered to be part of the UNCEDED exhibit, which is so important to our culture and futures as Indigenous architects!

We are proud of where we come from, of our Indigenous background.

We are proud to be part of the future of Indigenous architects and we look forward to one day completing our studies to further indigeneity in architecture!

The response: Turtle Island is from one of the most prominent Indigenous creation stories of North America. As for Indigenous architecture, Indigenous representatives need to be part of the architectural process, to be able to reflect the culture appropriately. As designers, we are designing with the people, not for the people.

The interactions we have encountered vary immensely. We noticed some visitors held a preconceived notion of what Indigenous culture represents, stemming from stereotypical portrayals in books and movies. A common reaction, to the representation of Indigenous culture, was reflected in the responses we received about the exhibition’s choice of presentation. The decision to communicate the topic of the exhibit through digital media was viewed as “too modern”. An individual commented on the use of film, audio and visual stimulus was intimidating since Indigenous people are so neatly woven with nature and were conscious of the environment and our visitor didn’t approve of the exhibition’s choice of materials. To continue, it didn’t reflect the ‘spirit of the Indian’. The individual was physically emotionally upset about how the information provided was nothing like the books they had read. The individual was profoundly moved by the novels and had envisioned an idea of what to expect.

The response: We think a lot of readers need to reflect on the authenticity of the novels. Who wrote it? Is the author indigenous? Were indigenous people consulted or included? It’s important to ask these questions since every culture should be consulted as representative for their own culture. If we had a biography written about ourselves, we would expect to be included. We hope this clarifies that readers need to be conscious of the authenticity of a book’s content.

There were also some examples of visitors who could relate to our story. An Australian couple came in and after seeing the UNCEDED exhibit they talked to us. They did not realize that the Indigenous culture of Australia was so similar to ours. To see common struggles in their country with the Indigenous population. We were asked by the couple “What would be an ideal situation?” (In terms of the lifestyle of indigenous communities) “Is it one, where the traditional outlook of living fully off the land is re-established, or is it about merging a contemporary lifestyle with traditional aspects and values?”

Which was a wonderful question! So, we took a second, and really thought about it.

The response: One is not better than the other just merely a total different lifestyle rooted from the same principles. But today we have adapted to the contemporary lifestyle merging our traditional knowledge with today’s technologies. There has been a movement towards embracing the culture, as it has become more socially accepted.

The response: It is important to realize how the exhibit impacts other people around the world. Many are going through similar situations, as we have learned about the situations in Australia and New Zealand.

Therefore, we are not alone! It is so important to open our eyes to understand and see what is happening. Many different cultures are connected through the same experiences that we were put through.

Throughout our six-week experience since June 3rd, we cannot express how wonderful this involvement for us has been. It has been exceptional to be able to share our interests with so many eager minds, learning more about Canadian Indigenous culture and architecture on a global scale. UNCEDED is a celebration of Indigenous culture. The Indigenous architects that represent Turtle Island are empowering and are changing the world’s perspective on Indigenous architecture. It had been an amazing experience to be part of the UNCEDED exhibit! We have recognized the strength within us and we have been reminded why we need to be aware of how the Indigenous culture needs to be represented by its people, especially as future Indigenous designers.